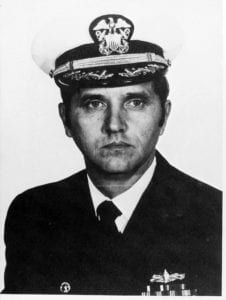 Captain Clifford F. Homan was born in Athens, Tennessee on November 21, 1933. He is a graduate of the University of Tennessee and received his commission in May, 1959 at the Officer Candidate School, Newport, Rhode Island.
He began his naval career with several assignments within the Amphibious force, U.S. Atlantic Fleet including an initial tour aboard the USS KRISHNA (ARL-38) as Operations Officer followed by assignments to the Staff of Commander Amphibious Group TWO, Operations Officer aboard the USS LINDENWALD (LSD-6) and as Communications Training Officer and Instructor at the U.S. Naval Amphibious School, Little Creek, Virginia.
After attending the U.S. Naval Postgraduate School in Monterey, California, he was assigned to the Office of the Chief of Naval Operations for duty in the Strike Warfare Division (OP-34) where he served on several Amphibious Warfare Study Groups at the Center for Naval Analysis.
Commander Homan then attended the U.S. Naval Destroyer School and was subsequently assigned as Operations Officer aboard the USS ENGLAND (CG-22). He served for eleven months as the Assistant Electronic Material Officer on the staff of Commander Cruiser-Destroyer Force, U.S. Pacific Fleet before assuming duties as the Executive Officer aboard the USS JOUETT (CG-29). Commander Homan assumed command of the USS BERKELEY (DDG-15) in January 1975. Captain Homan passed away on 8 November 1994.