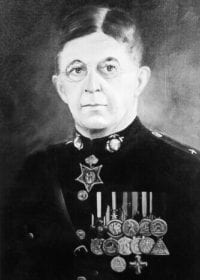 General Berkeley was born on January 9, 1875, at Staunton, VA., where he attended grade and high school. He graduated from Potomac Academy at Alexandria, VA in 1891, and was appointed a Marine second lieutenant on August 8, 1898, for service during the Spanish-American War. General Berkeley completed over 40 years active service in the Marine Corps, including service at sea and in the Philippines, Cuba, Panama, China, Haiti, Nicaragua and Guam. In addition to the Medal of Honor, he was awarded the Navy Cross as commander of the 11th Marine Regiment in Nicaragua in 1927, and the Navy Distinguished Service Medal as Chief of Staff of the 2nd Marine Brigade in that country in 1928-29.

General Berkeley, then a major, was commanding the 1st Battalion of the 2nd Advanced Base Regiment when he took part in the action which earned him the nation's highest decoration on April 21-22, 1914. Relations between the United States and the Huerta government of Mexico had been strained for some time, and a landing force of Marines and sailors was ordered ashore at Vera Cruz after a Huerta officer had arrested several U.S. Naval personnel at Tampico. The 2nd Regiment was the first ashore, meeting resistance from Mexican troops about noon on April 21. The citation for his Medal of Honor describes General Berkeley's part in the action:

"For distinguished conduct in battle, engagements of Vera Cruz, April 21st and 22nd, 1914; was eminent and conspicuous in command of his battalion; was in the fighting of both days, and exhibited courage and skill in leading his men through action. His cool judgment and courage and his skill in handling his men in encountering and overcoming the machine-gun and rifle fire down Cinco de Mayo and parallel streets accounts for the small percentage of the losses of Marines under his command."
In addition to the Medal of Honor, Distinguished Service Medal and Navy Cross, General Berkeley's medals and decorations include: The Spanish Campaign Medal, Haitian Campaign Medal, Cuban Campaign Medal, Mexican Campaign Medal, Philippines Campaign Medal, World War I Victory Medal, Second Nicaraguan Campaign Medal, the Marine Corps Expeditionary Medal and three Nicaraguan decorations - the Presidential Medal of Merit, the Medal of Distinction and the Medal of Merit.
Following his retirement in 1939 General Berkeley lived in Beaufort and Port Royal, South Carolina, until his death in 1960.