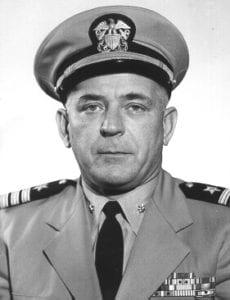 Captain Michael D. Ricinak served as the second Commanding Officer of BERKELEY from July 1964 to January 1966. He graduated from the U.S. Merchant Marine Academy in 1944 and saw action in the WW II Pacific Theatre while on board the USS NORTON SOUND (AV-11). His next tour was aboard the USS NESPELEN (AG-55) and then on to graduate school at Miami University of Ohio. While attending the Navy General Line School, Monterey, the Korean Conflict began and he was soon back in the Pacific, this time aboard the USS ESSEX (CVA-9). Later Korean duty included assignment as Operations Officer aboard the USS HYMAN (DD-732).
In 1953 he was assigned to staff duty with COMDESLANT. His
next tour was with the Naval Reactors Branch of the Atomic Energy Commission. From 1958 to 1960 he served as Executive Officer of the USS BRISTOL (DD-857) and commissioning Executive Officer of the USS DEWEY (DLG-14).
Following this sea assignment he then moved ashore for duty with BUPERS followed by duty in the Office of the Under Secretary of the Navy. His next assignment was C.O. of BERKELEY and he was promoted to Captain during this tour of sea duty. After BERKELEY he reported for duty as Chief of Staff, COMCRUDESFLOT SEVEN. From 1967 to 1969 he served as Assistant Director, Navy Program Planning (OPNAV). Next he spent one year as a student at the Industrial College of the Armed Forces. In 1971 he reported for duty as Project Manager, New Ship Design Concept (OPNAV). For his final tour of duty he served as Special Assistant to the CNO and retired in 1975. Captain Ricinak passed away on 20 May 1999.