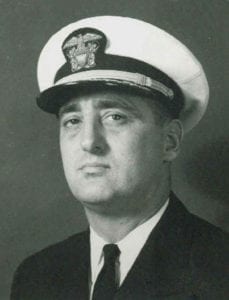 Captain Harper attended Williams College, Williamstown, Massachusetts, under the U.S. Navy Officer Training Program and was commissioned an Ensign in June 1944. In October that year he married the former Mary Bennett of Fort Pierce, Florida. Following his commissioning he was assigned to the USS REGISTER (APD-92) for the remainder of World War II. During this tour REGISTER sustained damage from a Kamikaze plane and also rescued survivors from the cruiser USS Indianapolis.

Following the war, Captain Harper served in a variety of sea and shore assignments including duty on the USS TANAGER (AM-385) as Engineer and Operations Officer and duty on the staff, Commander Mine Squadron EIGHT as Operations Officer and Chief Staff Officer. He then commanded USS GROSBEAK (AMS-14). Captain Harper’s next assignment was to the General Line School in Monterey followed by a tour of duty in the Officer Procurement Branch, Bureau of Naval Personnel.

In March 1968 Captain Harper took command of the USS GRIDLEY (DLG-21) until September 1968 when he received orders to report to the USS HALSEY (DLG-23) as Commanding Officer. Captain Harper passed away on 2 November, 1972 while still on active duty.