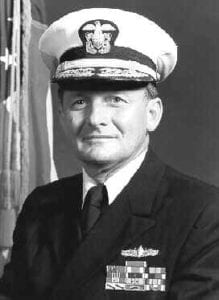 Rear Admiral Thomas M. Ward, Jr. served at the fourth Commanding Officer of BERKELEY from August 1967 to August 1969. He graduated from the U.S. Naval Academy in 1951 and reported to his first duty assignment aboard the USS ENGLISH (DD-696). On detachment in the fall of 1953 he reported to the USS TOWHEE (AM-388) as Executive Officer. In August 1954 LT(jg) Ward received orders to the USS CARDINAL (AMS-4) as Commanding Officer.
In July 1955 he reported to Naval Postgraduate School in Monterey for a course of study in the Ordnance curriculum receiving a BS degree in electrical engineering and was selected for a third year of postgraduate education at Massachusetts Institute of Technology. After receiving a Master of Science Degree he reported to the USS GYATT (DDG-1) as Weapons Officer in August 1958.
In November of 1960 he received orders to the Naval Missile Facility at Point Arguello, California as a missile flight safety officer for Vandenberg Air Force Base. In 1962 he was sent to Johnson Island to support Joint Task Force 8 as the missile flight safety officer for live nuclear weapons testing. In the spring of 1963 he reported to the USS BUCHANAN (DDG-14) as the Executive Officer. A tour as a student at the Naval War College followed in August 1964 with subsequent assignment to duty as an instructor in the weapons department at the U.S. Naval Academy in the summer of 1965. Following detachment in the summer of 1967 he reported to the USS BERKELEY (DDG-15) and served as the Commanding Officer.
Following his tour in BERKELEY he again attended the Naval War College and participated in a pilot Sea Grant program at the University of Rhode Island receiving a Masters of Marine Affairs degree in the fall of 1970. On reporting to the Naval Ordnance Systems Command in September 1970 he was assigned as the Program Manager of the NATO Seasparrow Surface Missile Systems Project during the period of development, operational testing, obtaining service approval and entering first production.
In August 1974 he assumed command of Destroyer Squadron Seven. On detachment in August 1976 he reported to the Naval Ordnance Systems Command as Director, Surface Warfare Systems Group. On selection to flag officer he was transferred to OpNav as Director, Combat Systems Division (OP-34). He subsequently served as Commander, Naval Surface Group Middle Pacific and as Deputy Director for Surface Combatant Ships, Naval Sea Systems Command.
Since retirement in the summer of 1982 he worked for various defense contractors with offices in the tidewater Virginia area. He fully retired in 1991. RADM Ward passed away on January 9, 2018